Have you been assigned a research project and don’t know how to proceed?

The Library can help!

Make an appointment to meet in person, online, or over the phone!

In 1874 at the request of the governor of New York, the U.S. Navy transferred the St. Mary's to the newly established New York Nautical School (now SUNY Maritime College) for use as a schoolship. Students received education and training on the ship until 1908.

Brief History of the St. Mary's 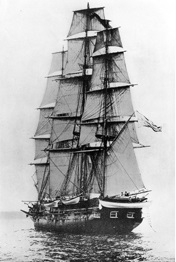 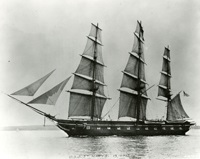 Designed by Charles B. Brodie for use in the Mediterranean Squadron, the Sloop-of-War Saint Mary's was laid down in 1843 at the Washington Navy Yard. She was launched on November 24, 1844 and received a commission from the U.S. Navy on December 13th of the same year. However, by the time her construction was finished she was needed in the Gulf of Mexico where she served as a diplomat and troop transport before engaging in the hostilities of the Mexican War.

Most of St. Mary's career in the U.S. Navy was spent in the Pacific Squadron where she engaged in gunboat diplomacy in Panama and Nicaragua before the U.S. Civil War (1861-1865). During the Civil War she served as the chief representative of Union Naval forces. After the war, St. Mary's had one last major cruise in the Pacific going to most major ports including New Zealand and Australia. In 1874 at the request of the governor of New York, the U.S. Navy transferred St. Mary's to serve as the school ship for the new nautical school based in New York City. Beginning her duties in 1875, this historic ship served the school that would eventually become SUNY Maritime College until 1908 when she was sold to Thomas Butler and Co., beached, and destroyed for scrap.